Because holidays are essential

The Agence nationale pour les Chèques-Vacances (ANCV), a public body of the State, is in charge of a mission of public service in France: to promote access to holidays for as many people as possible. It accomplishes this mission through a set of services and aids: the Chèque-Vacances, a voucher intended to pay for expenses related to holidays and leisure activities, which benefits 4.5 million employees, public servants and self-employed workers; individual allowances, which make it possible to support the holiday departure of 290,000 vulnerable people each year - precarious families, young people in difficulty, isolated senior citizens, people with disabilities, etc.

We are going through a radically unprecedented health crisis, which obviously increases economic and social fragility and makes access to holidays even more difficult for vulnerable people. This crisis is particularly affecting young people's holidays, reinforcing pre-existing obstacles: limited income, dependence on housing, difficulties in finding work, isolation, poor holiday culture, sometimes precarious living conditions. However, the human benefits of going on holiday are important for them: autonomy and gradual integration into adult life, learning transferable skills such as organising a holiday or drawing up a budget, mobility and social and cultural openness, escape that encourages mobilisation in a social integration process. More simply, holidays meet their need, intensified by the health crisis, to be with friends in an environment that is not that of daily life.

Already involved with 70,000 young people and children each year through its various holiday support programmes, in 2014 the ANCV created a specific offer aimed at 18-25 year olds: the "Départ 18:25" programme enables them to go on holiday at a low price by benefiting from support under conditions of status - being involved in an integration process - or resources - having a modest income. In just a few clicks, they can make their holiday dreams come true on the www.depart1825.com platform, which offers a large number of destinations by the sea, in the mountains or in cities in France and Europe.

At the request of the State, the ANCV mobilised Départ 18:25 to support access to holidays for 50,000 young people this summer, by increasing the aid to 90% of the cost of the holiday up to a limit of €300, an exceptional level corresponding to the search for a trigger effect to overcome obstacles. The operation was widely publicised to young people and their families by the Caisses d'allocations familiales, the Centre national des œuvres universitaires et scolaires and the Agence du service civique. The ANCV and the operator of the online platform have deployed this communication on social networks, taken up by young influencers. At the beginning of August, half of the target had been reached and bookings were continuing, with stays possible until 30 September.

This action is, among many others in the period the world is going through, an example of initiatives that give full meaning to the values of social and solidarity tourism. 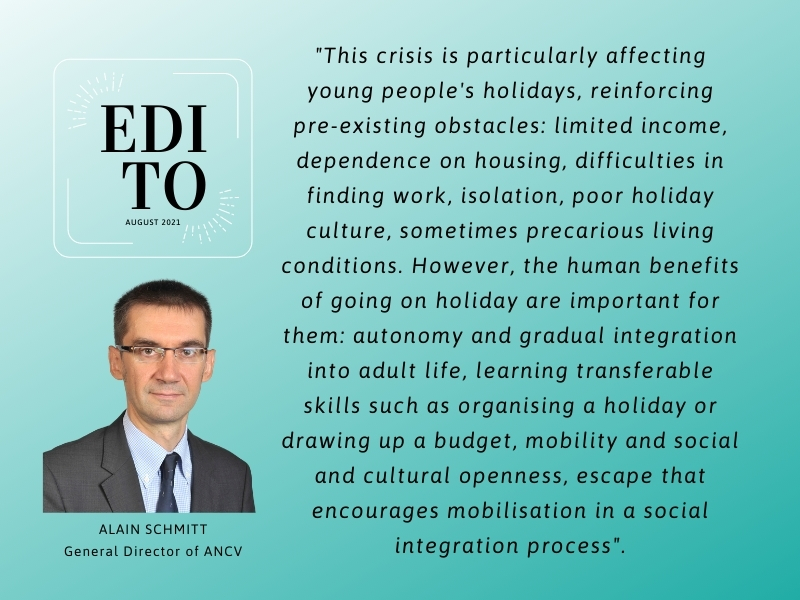 Why Madhya Pradesh is a model of gender equality and inclusion to reproduce?

Recommendations on Digital Accessibility in Tourism

Tourism in actions: 20 examples of social policies and programmes around the world