Redesigning the future of tourism. The role of ISTO members.

The global crisis resulting from COVID-19 has confirmed that we need to generate a more sustainable and friendly model of development, one that not only meets the challenges of planetary conservation - fundamental to our own survival as a species - but also allows human beings to live fuller lives.

Redesigning the future, as Russell L. Ackoff proposed in his book several decades ago (and from whom I borrow the concept for the title of this editorial), cannot be postponed if we are to solve the acute development crisis that the pandemic has only served to highlight.

Historically, ISTO has proposed actions to develop a model of tourism development and operation at the service of people, communities and territories that first materialised in the Montreal Declaration Towards a humanist and social vision of tourism, our guiding document of principles. The principles embodied in this declaration were, at the time, frankly subversive in Ackoffian terms: quixotic and impracticable in the opinion of most.

However, the enormous contradictions arising from tourism development fuelled the creative spirit of those involved in the sector to set up alternative operational projects based on humanist and environmentalist principles which, as our membership expanded, fuelled discussion and ideas to develop a more relevant and concrete model of tourism design and operation.

As a result of our expansion in the Americas - a region of enormous contradictions - and almost 25 years of exchanges between the members of that region, the concept of Development Tourism was coined, used for the first time in Rome during an anniversary meeting of social tourism in Italy, and which sets out what responsible, fair and sustainable tourism practice should look like.

Social tourism is, today more than ever, a principle and a solution for a global society burdened with bad tourism practices that destroy the environment, culture and society, turning against humanity itself.

The current challenge is to recover the sector, which requires restructuring it: less tourism development and more development tourism.

The fundamental challenge is, however, structural: to align all actions with humanitarian and social principles (embodied in the agenda of international organisations such as the SDGs) and, in the case of ISTO, to strengthen our global network.

ISTO will continue to generate spaces of exchange to inspire more tourism stakeholders, but this requires the active and permanent participation of its members. Hence the importance of their role and our interest in keeping them active within ISTO.

Across the world, ISTO members have taken actions that once could be seen as disruptive or revolutionary. Today these actions are proactive. What was once a cause for criticism has now become an inspiration and a guide to many other colleagues around the world.

From the private sector, from local government, from cooperative and community effort, from personal initiative, all our members have invented new ways of practising better tourism for all.

That is why we must leave behind our traditional modesty and participate, propose and disseminate the work of our organisation openly and with pride. Now is the time to influence the sector globally for change. ISTO is opening new spaces for the dissemination of these initiatives. As members, it is up to us to make ISTO the global reference organisation on the subject.

For a better tourism for all... 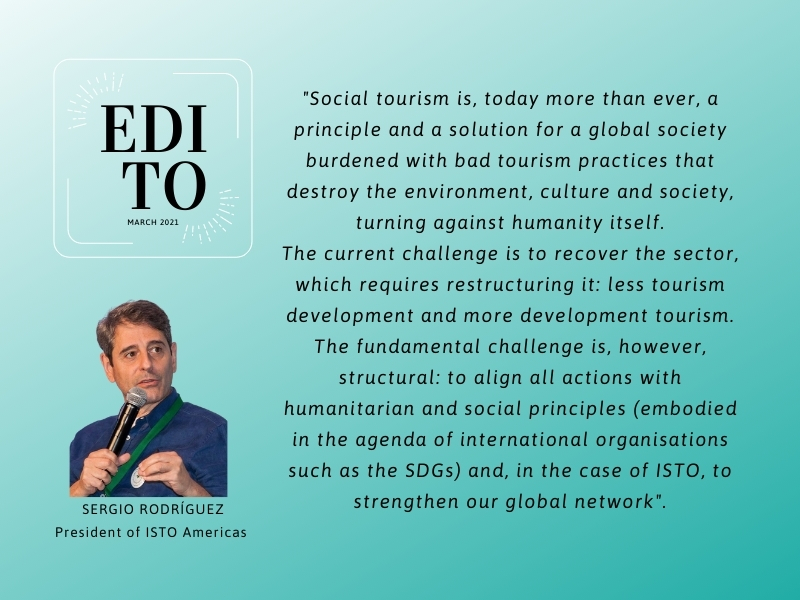 Plenary Session 1 - How can we impact the social sustainability of tourism in times of uncertainty?

Parallel Session 3 - How social sustainability of tourism can accelerate inclusivity?